Australia at past APBF Championships

The format of the APBF Championships is generally a double round robin, give or take. Sometimes one of the round robins is shortened in order to fit into the schedule. But a key element of the format is that there are no knockout matches or finals – every match counts equally.

As Korea is only one hour difference from the east coast of Australia, it will be convenient for supporters back home to watch the 2017 Championships on BBO. The schedule of the matches is available here, with the first match starting on Monday morning at 10am AEST.

Australia has historically done quite well at the APBF Championships across the various categories. Today, let's have a look at some past results of Australian teams to get a better idea of where we stand in each category.

In the Open category, Australia’s last win was in 1970, despite several close runs at the gold medal. In fact, the Australian Open Team has had nine silver medal finishes, including three in the last decade, so we are clearly there or thereabouts. It goes without saying that a win in the Open category would be of historical significance for Australia.

Aside from Australia, China and Japan are usually strong contenders for the Open title. New Zealand last won the title in 1995 and are riding a wave of success including beating European champions France in the World Bridge Series, and Ashley Bach-Michael Cornell winning the World Pairs Title at the same event.

In the Women’s category, Australia has had more luck, winning eight times. However, the last win was 22 years ago in 1995. Amazingly, both Sue Lusk and Margaret Bourke of the 2017 Women’s team were there to collect the gold medals all those years ago! With luck, they will be able to have a shot at adding another medal to the cabinet.

As mentioned in my previous post, China will be the force to overcome for the Australian women. 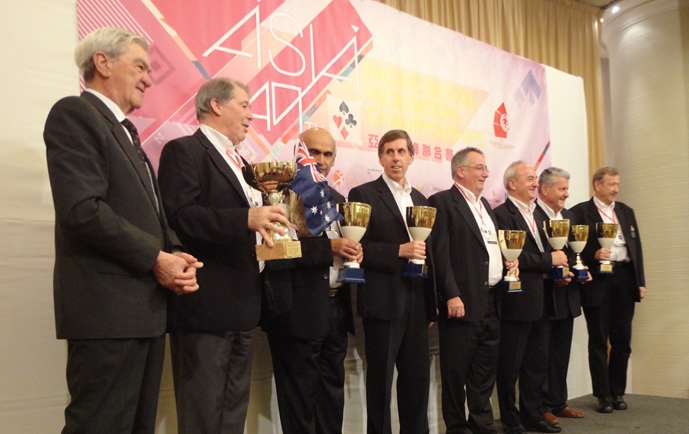 In the Seniors', Australia’s results go back to 2002 when the category was introduced, with ten appearances in total and three wins. Their last finish at the top was in 2013 (above photo), and the Seniors' were also victorious in 2010.

The Indonesian and Japanese Seniors' teams are the only other teams apart from Austrlia to have won in this category and these will be the teams for Australia to focus on.

The 2013 Australian U25 Team, who staged a dramatic comeback to win the 2013 APBF championships.

In the Junior (U25) category, Australia will certainly hope to be near the front of the field, having won four out of our last six appearances. Indeed, one of our Open pairs (Justin Mill-Peter Hollands) have played three U25 APBFs and never finished below first! This year’s Australian U25 is perhaps less experienced than in previous years, but they will still have realistic hopes of success.

Australia is the most successful team at U25 level apart from the Chinese powerhouse. The last time Australia won the event (2013), they managed a big upset against China in the final match to steal the gold. You can read more about that here.

Finally, in the Girls (U25) category, this is only the third time the category has been held. China has won the first two renditions. Australia has never sent a Girls team to the APBF before, but this year’s team will likely have reasonable chances of success, given that three of the five members were part of 2016’s sensational result at the World Youth Teams Championship.

< Welcome to Seoul; introducing the Open and Women's teams
Spotlight on Australia's Youth >